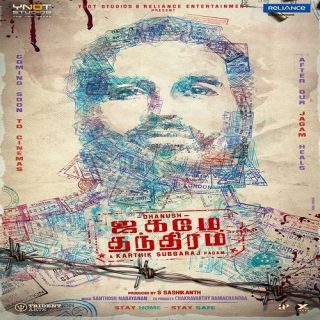 Jagame Thandhiram (2021) is a latest Tamil movie featuring by Dhanush, Aishwarya Lekshmi, James Cosmo and film written by Karthik Subbaraj with directed by Karthik Subbaraj and Cinematography by Shreyaas Krishna while movie produced by S. Sashikanth and Chakravarthy Ramachandra under YNOT Studios, Reliance Entertainment. The movie's songs is composed by Santhosh Narayanan.

The movie project was initially announced in April 2016 with Thenandal Studio Limited bagging the project, but eventually got shelved due to the financial problems surrounding over the production house. It was revived once again in February 2018, with YNOT Studios acquiring the rights for film production.

This film was release in theatrical on 1 May 2020, but was delayed due to the COVID-19 pandemic. While the makers planned on releasing the movie only in theatres, this decision was dropped in February 2021 in favour of a digital release through Netflix. The film is ready to be released on 18 June 2021